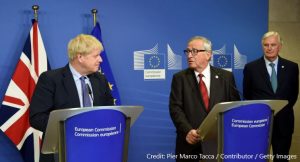 The accusation of Michel Barnier, the EU’s chief negotiator on Brexit, that the Prime Minister is backsliding on his commitments rests on a false premise: it assumes that Boris Johnson knows his back from his front.

In fact, the Prime Minister has slid into a half-circle position that is 180 degrees distant from that of the EU. This is very clear as both sides are briefing in preparation for the mid-June summit between Johnson and the President of the European Commission, Ursula von der Leyen.

In the topsy-turvy world of UK-EU negotiations, it is Barnier who wants to go backwards to the conditions of the Withdrawal Agreement that the Prime Minister signed last year.

By contrast, Boris Johnson wants to go forward to negotiate a new agreement: he is no more willing to be held to that six-month-old document than to a month-old column that he wrote as a journalist.

The evasiveness of the British government about how or whether it will implement the agreement has given a fresh boost to Brussels’ already high level of distrust in Downing Street.

The EU’s priority is to implement the legally binding terms of the pre-Christmas agreement. They concern a level playing field for the exchange of goods and services and procedures for enforcing the agreement.

By contrast, Downing Street is treating this year’s discussions as a fresh cricket match and bowling googlies. Brussels sees this as playing dirty pool.

Johnson is sliding away from the December agreement because it contradicted principles of his party’s hardline Brexiters.

Having led the party to a massive election victory, newly-elected Conservative MPs endorsed the deal to get Brexit done. On 1 February Downing Street declared it was time to move on and stop talking about Brexit.

What Boris Johnson wants is a fruitcake agreement in which he can feed all the cherries to his pro-Brexit party and leave on the plate crumbs of obligations from last December’s agreement.

These obligations include common standards for trade in goods and services between the UK and the EU and their enforcement by European courts.

The EU is much less flexible than the Prime Minister. Whereas Boris Johnson is unaccountable for what he does about EU affairs, Michel Barnier is accountable to the European Parliament, the European Council that represents member states, and 27 national parliaments.

While Theresa May was failing to get agreement with Conservative MPs about Europe, Barnier was negotiating with his disparate masters non-negotiable principles incorporated in last December’s agreement.

The principle of a level playing field is non-negotiable because it affects the integrity of Europe’s single market.

For goods and services to move freely between member states they must meet common standards affecting state aid to industry and standards of health, safety and labour. Financial services, where the City of London has a massive stake, are similarly subject to common EU rules and regulation.

Reducing the obligation for Britain to meet such standards when exporting to Europe’s single market would tilt the playing field against the EU’s 27 member states. It would also open an avalanche of demands by individual member states to be allowed exceptions a la Anglaise.

The British rejection of a level playing field is based on ideology, not economic calculation. Brexiters rightly argue that it is illogical for the UK to take back control of economic affairs from the EU and still be bound by its single market rules.

However, UK regulators have failed to detail which standards will be repealed or modified by the British government. This makes it impossible to calculate the benefits for British consumers of departing from EU rules.

What is certain is that the non-tariff costs in paperwork for British exporters to continue trading with Europe will raise costs by complicating supply chains bringing industrial parts and fruits from Europe.

Under pressure from the National Farmers’ Union, the UK has set out conditions for the inclusion of agricultural goods in a putative US trade deal. They are inconsistent with American agriculture practice.

Regardless of who is in the White House next year, one thing is certain: more than nine-tenths of Senators – who hold a veto on a trade deal – will represent states with significant agricultural interests.

The British government’s current trade policy for China is to introduce fresh controls on political as well as pandemic grounds.

It is logical for the UK to insist that the purpose of Brexit is to get rid of the influence of EU courts just as it is for the EU to insist that any UK-EU agreement must have provisions for enforcement. It is also prudent for the EU to do so, given Brussels’ experience in dealing with the Prime Minister.

This need not be an obstacle if Johnson is prepared to package as a British triumph an agreement that meets Brussels’ requirement for effective enforcement procedures.

The dispute on fishing rights is political and economic rather than ideological. Five important member states, including France and Spain, want to retain access to fishing waters reverting to the UK after withdrawal.

Brussels can ask these states whether they will compromise their demands or insist on maintaining them even if it would lead to a no-deal outcome imposing substantial losses on member states without an interest in fishing such as Germany.

The EU said this was to prevent the hypothetical export of large quantities of goods from Britain to 27 EU member states via Northern Ireland, or from Asia to England to Ulster to the Republic and on to the continent. A pair of Nelson’s eyes could deal with this problem, one blinding Britain and the other Brussels.

The EU would like to see Boris Johnson come full circles, arriving back at their December starting point.

However, Johnson’s half-circle strategy is to avoid encirclement. It leaves him free to break away from discussions with Brussels and head into the unbounded and unknown world beyond Brexit.

He will not be alone in doing so, for he will have by his side his constant companion in plotting strategy, the arch-Brexiter Dominic Cummings.

By Richard Rose, Professor of Public Policy at the University of Strathclyde. His newest book is: How Referendums Challenge European Democracy: Brexit and Beyond.

What would it take to undo Brexit? | Would you buy a used car from one of these men? | The EU’s Democratic Deficit is Structural not Reformable | Britain’s Zen approach to dealing with Brussels | A history lesson for Prime Minister Jeremy Corbyn |

Which way is Boris Johnson sliding? | Will Boris Johnson get the Brexit deal he wants? | Another ‘who governs’ election with no answer? | What do we need: a general election or second referendum? | EU and Theresa May share the same goal: self protection |