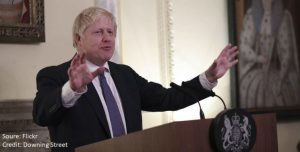 The government’s approach to building a post-Brexit trade policy appears based on Zen philosophy rather than economics. In economics textbooks, trade is a two-handed exchange between two people, an exporter and an importer, and one of these is foreign. By contrast, a Zen koan encourages individuals to believe in a world in which you can hear one hand clapping. A Zen trade policy is a policy without foreigners. It follows logically from the one-handed justification of Brexit, restoring sovereignty to the Westminster Parliament. It replaces the belief that Britain could engage with foreign governments by using its global links, diplomatic skills and soft power to punch above its weight. A Zen policy is shadow boxing, for it does not engage with foreigners. Whereas the coronavirus epidemic has put a short-term ban on shaking hands, the Conservative Brexiters want the ban to be permanent. Taking back control gives the British government the unilateral power to refuse a deal, and Boris Johnson has repeatedly declared his readiness to walk away

with no deal rather than shake hands with the EU on a deal that infringes British sovereignty. When trade discussions began in Brussels British and EU officials each side sat behind laptops loaded with conditions intended to protect their respective sovereignties. Symbolically, there were ten metres of empty floor space between the two delegations, requiring more than three ten-foot poles for the two sides to be close enough to shake hands. The suspension of meetings between British and EU teams due to the coronavirus epidemic has now placed the English Channel between the two teams. That barrier is necessary but temporary. The need for the government to have a policy for trading with the EU’s 27 member states is necessary and of long-term importance. The British position starts with a list of things that the UK will not accept because they infringe newly regained sovereignty. These include an unwillingness to accept current and future EU regulations that set standards that British goods and services must meet, or that would restrict state aid to industries in newly-won Conservative constituencies in the north of England. The government also rejects allowing EU courts having a hand in the enforcement of any agreement between Westminster and Brussels.

The government invokes international law to claim sovereignty over fish that swim into British territorial waters and to exclude fishing boats from European countries that pursue the fish. Whereas medicines to treat the coronavirus do not recognise national boundaries or passports, to protect Britons from vassalages to foreign medical standards, the government has withdrawn from the European Medical Agency that tests anti-virus drugs – so that anti-virus testing can be kept safely in British hands. The priority for the EU is to maintain a level playing field for trade among member states belonging to the single market.

It has a wide range of laws and regulations imposing common standards of product safety, health, working conditions, the environment, state aid for industries and much else besides – all policies that may directly or indirectly affect the stream of commerce within a single market. The British government does not want to have its hands tied by current regulations, or by whatever future rules the EU decides to adopt in the future. The purpose of Brexit is to give Britain the freedom to diverge from the EU’s rules and regulations, real and imaginary, that Boris Johnson attacked as a journalist based in Brussels. In the absence of any Downing Street guidance about what divergence actually means, EU governments throw up their hands in horror at the prospect of the UK dropping standards and prices and thereby gaining billions in trade in the single market. The British approach to negotiating a trade deal with the United States is equally based on Zen. The starting point is a refusal to allow the import from America of chlorinated chicken or genetically modified crops, and refusing to allow American pharmaceutical companies to compete in selling products to the NHS or American health management firms to provide services that can be contracted to the British private sector. The government’s conditions for an American trade deal is a domestic foreign policy par excellence. It can secure robust applause in Westminster but thumbs down in Washington. Any trade deal requires majority approval by both the House of Representatives and the Senate. Nine-tenths of senators represent states where farmers are important as voters and all members of Congress are eligible for campaign funding from American health and pharmaceutical lobbies. Whoever is in the White House may find time to pose for a photo shaking hands with Boris Johnson and then return to the White House to deal with important matters, such as sorting out American trade with China. The Zen approach to policymaking is also found in defence. British nuclear submarines, aircraft and aircraft carriers are evaluated in terms of their claims on the British budget, the jobs they will deliver to defence contractors and the putative merits of their technology.

They are not evaluated by their effectiveness if used against potential enemies or the relevance of twentieth-century hardware to provide cyber-security or biological threats of death. Ironically, EU negotiators can use their sovereignty to enable Boris Johnson to claim success in trade negotiations while protecting its single market from Britain exploiting the post-Brexit freedom to diverge from EU standards. It could accept an agreement in which the UK pledged it would maintain equivalent standards for the regulation of economic activities. It could also accept each partner having the unilateral right to invoke trade sanctions if it decides that equivalent standards have been breached. Thus, if the EU decided British standards were profiting British exporters at the expense of the member states it could unilaterally invoke sanctions that would produce a shaking of fists in the City of London and industrial areas. It could pull the trigger on sanctions that imposed costly restrictions on importing British goods and lockout the City of London from its current right to trade profitably with Europe.

By Richard Rose, professor of politics at the University of Strathclyde Glasgow and a fellow of the Robert Schuman Centre at the European University Institute Florence. His new book, How Referendums Challenge European Democracy: Brexit & Beyond Palgrave, is out in June.

What would it take to undo Brexit? | Would you buy a used car from one of these men? | The EU’s Democratic Deficit is Structural not Reformable | Which way is Boris Johnson sliding? | A history lesson for Prime Minister Jeremy Corbyn |

Britain’s Zen approach to dealing with Brussels | Theresa May is trying to stay afloat on Brexit, but she keeps finding herself in a hole | Voters endorse an Alice-in-wonderland Brexit | Does Tony Blair have an answer to Shakespeare’s Hotspur? | How achievable are the UK’s 12 goals for Brexit? |